I decided to make a very thoughtful Christmas gift for a friend.  I found a kit to make “Ninjabread Men,” complete with gingerbread baking mix and a set of four ninja-pose cookie cutters.  (We have an inside joke about him being a ninja.)

But using the mix wouldn’t be thoughtful enough, I decided (even though the recipient would have no idea…).  So I decided to work from scratch.  And here is the tale of my test batch.

Gingerbread Cookies 101 recipe from Food Network, only I doubled all of the spices except for salt and pepper, as many reviewers recommended.

Did you know that if you don’t have a flour sifter to mix all the dry ingredients, you can just pour everything into a bowl and wire-whisk it with abandon, causing a cloud of cinnamon and cloves and allspice and ginger to billow up at your eyeballs?  I do, now.

I now call it crybread dough.

And did you know that it has a very small temperature window at which it can be reasoned with while rolling?  Whatever the recipe said, I’m not sure, because I tore up my handwritten copy to soak up the tears that streamed down from my inflamed eyes.  But I gathered that once the refrigerated dough discs were removed from the refrigerator, I had roughly 2.875 minutes to prepare myself while they un-chilled just enough not to crack under the rolling pin, and then about FIFTEEN SECONDS of quality rolling time before the dough continued to un-chill itself into a gooey paste that no flour or powdered sugar could repel from the pin.  And forget removing the cut cookies from the rolling surface and moving them…. nope.  I’m glad I bought a silicone baking mat at the recommendation of a recipe reviewer and did the rolling on that, so that I could scrape away the excess pasty, melty dough from the little man armpits and just toss the mat on a pan and shove it into the oven. 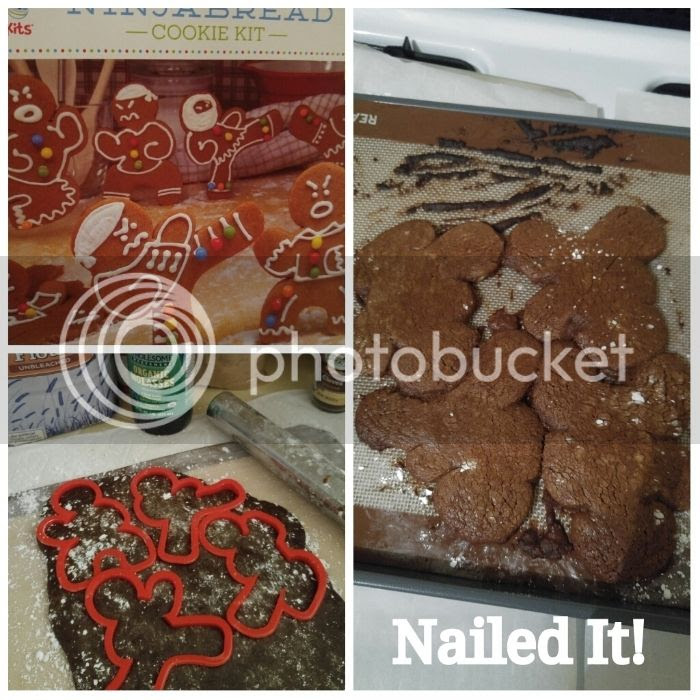 I guess I couldn’t really go wrong with gifting my friend with poop cookies.  I mean, what guy doesn’t appreciate poop humor?

The upside is that once I hacked them apart with my spatula, they did taste like gingerbread!  and I’m glad I doubled the spices.  Definitely gingery and a bit spicy, but not overly so.  I imagine the original recipe would have been a bit bland.

The “real” batch, which I’ll make on Wednesday, will be rolled out a bit thinner so they’re less of a poop pile and more of a ninja shape.  And then, the royal icing adventure begins…

View all posts by littlemilo